This week in the garden it’s been more slow build than mad dash. The snowdrops are filling out splendidly, the scent of the sarcococca is noticeably gathering in the air, the hamamelis buds are beginning to show their spidery finery. And this is all good stuff. But the muscari…

This is the week that I curse the muscari.

These are the muscari that I chucked into the edge of a couple of borders one year after they had done their lovely thing in my containers.

Let me tell you that this was a big mistake! Because around about now is when they pop up where they aren’t wanted, looking all grassy and meh. They hang around in tatty clumps and annoy the hell out of me. Last year I had a purge and thought I’d got rid of them all. I moved a whole heap of the little blighters to fill the area under the espaliered apples in the veg garden. But here they are, back again in the borders. And particularly annoying, they are mustering right outside the kitchen window.

So I’m staring right at them, right this very minute.

My advice for what it’s worth is to be cautious of anything described as vigorous. Invasive is self evident; we all know to steer clear of invasive. But vigorous can sound like a really good thing. The problem is that once you’ve got vigorous in your garden, it’s going to be with you for a very long time. So you’d better be sure you like it.

My current offenders are the aforementioned muscari, an acid yellow primula that popped up out of nowhere and at first I rather liked, an alstromeria I innocently bought at a plant fair. There are others that turn up a bit later, like alchemilla mollis, centranthus ruber, valeriana officianalis, verbena boniarensis and tellima that I like enough to forgive their overenthusiasm. But you can have too much of a good thing and liking can turn to loathing when there is an overabundance.

In my opinion muscari are best in containers or borders where their clumping habit is acceptable. This is not in full view of where I sit to eat my breakfast.

Apart from muscari madness we have had another bit of excitement in an otherwise quiet week in the garden. This morning saw the arrival of…

If you are a regular reader of this blog you will know that I wage constant war with the rabbits in my garden. And nine times out of ten – actually make that ten times out of ten – they win. A couple of weeks ago we noticed that a mound of earth had appeared in the corner bed on the drive side of the house. Seemed like the demon bunnies were tunnelling their way in. Quick call to the pest control people who have helped with a rat problem in the past. Vanessa the pest lady pops round and tells us that this time round we have a rabbit problem.

Now I don’t need this spelling out. But under the house is a new one on us. Vanessa suggests that ferrets could be the answer. My favourite ever answer phone message is the one that begins: ‘Hello, this is The Ferretman speaking…’

So Martin turns up with his ferrets. And it’s all very exciting. And he gets going with nets and ferrets. But the rabbits are too clever for us. They appear to have gone elsewhere. For the time being at least. I know full well that they will be right back the moment that The Ferretman has gone.

Last year my sister Lucy and I each bought a hippeastrum bulb from Petersham Nursery. Simply described as ‘orange’. We planted them at the same time in the middle of November. Hers went ballistic, grew about two foot tall in what seemed like a matter of days, and was flowering by Christmas. Mine did pretty much nothing. For weeks I thought it was dead. Until it showed a little tongue of green. And grew. And grew.

And then last week it began to flower.

I’ve been recording its progress.

First one flower began to open. 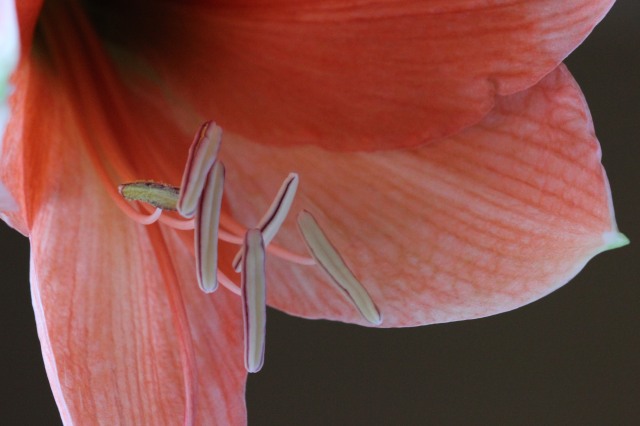 It opened a little bit more. 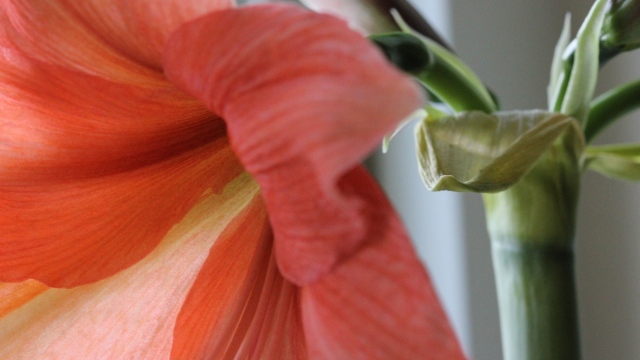 Then another flower got going. 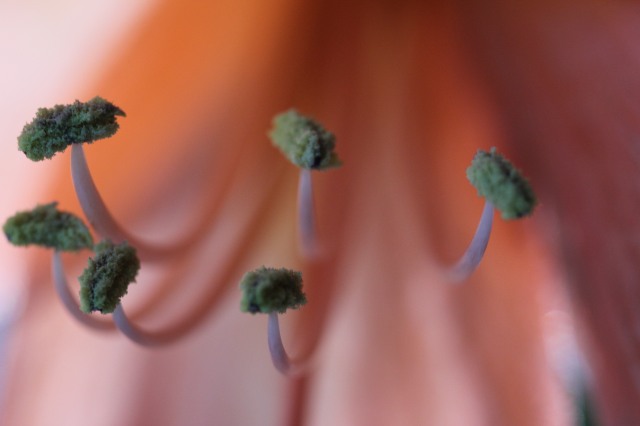 I couldn’t take my eyes off it.

At night, under a spotlight, it glistened and gleamed. It was hard to believe that it was real.

This morning it was in full flower. Taking up so much space that my problem was a lack of a background to shoot it against. I tried black velvet – not a large enough piece to fit in the whole flower head. But enough to give an idea of its fabulousness.

I’ve had more pleasure from this one bulb than from a million muscari. But they will have their chance to redeem themselves when they start to flower. Then I will forgive them anything.

4 thoughts on “Cursing the muscari”