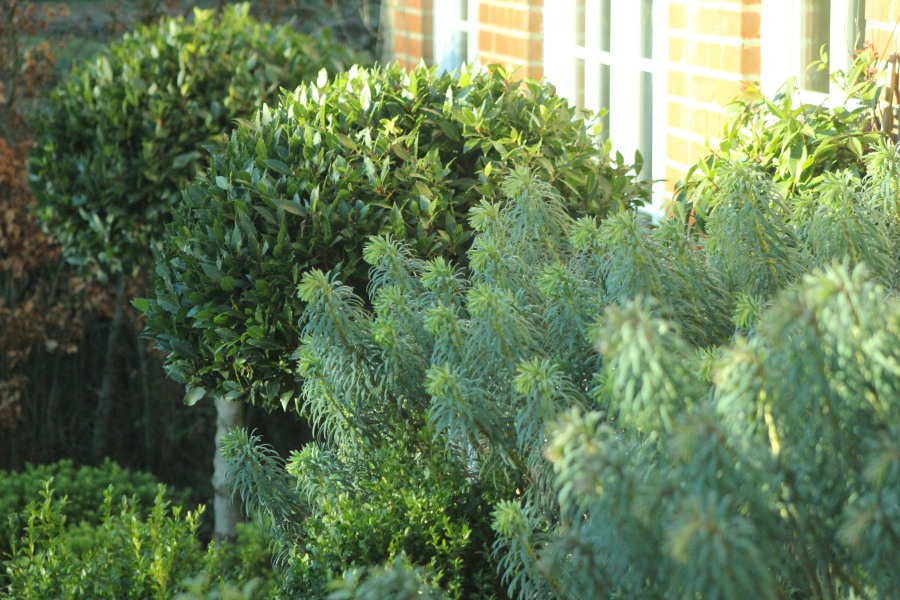 So it’s Week Five in the Big Brother house.

Maybe it’s the weather that’s making me hear voices. This week it feels colder and greyer than ever and I’m beginning to feel a little bit stir crazy. I’m looking out at the garden, and I have absolutely no desire to go out there. Which is making it something of a challenge to come up with what to write.

But, luckily for me, there was a day this week that the Great Garden God smiled. And the day he did was Tuesday, which happened to be the day that Chris, the Rose Pruner, was coming to help me with pruning the roses on the pergola that are too high for me to get to on my own. It was the day that the wind dropped and the the sun shone, and we were able to get on with pruning, and I tidied up the apple trees which have been nagging me  for weeks. And apart from discovering that the pergola that holds up the roses and wisteria is rotting away, which is one of those one step forward, two steps back moments that go hand in hand with being a gardener, it was a really good garden day.

One of the best things about it was that I got to use my new Niwaki telescopic pruner for cutting stuff that is very high up. I bought it for myself in January after last year’s purchase of Niwaki shears changed the box shaping/pittosporum sculpting task forever. (I find it hard to believe that I am the woman who gets excited over a garden tool. But hey ho.)

So I was too busy wielding my new toy to have much time to take photos for this post. Which is not such a bad thing because as much as I love my roses they are not at their photogenic best when they’ve just had a short back and sides. But I did manage to stop and take some shots of the seedheads of the Hydrangea Annabelle to send in for the last assignment of my online photography course.

This was my attempt at achieving/creating Bokeh. Have you heard of Bokeh? Me neither. (Or maybe you have heard of Bokeh, and it’s just me.) For the uninitiated let me tell you that Bokeh is ‘the visual quality of the out-of-focus areas of a photographic image, especially as rendered by a particular lens.’ It means ‘blur’ in Japanese.

I used to think blur was a bad thing in photography. Which just goes to show how much you can learn in a short space of time.

Each of the four assignments I have had to complete for the course have required me to send in two to three photos. With the lack of flower action in the garden and the inclement weather I had to resort to sending a photo I took last year of Amelanchier blossom shot against Tulip Apricot Beauty as an example of using a contrasting background.

I was worried it might be cheating to use last year’s material. But I’ve just heard back from Clive (did I mention how much I love Clive!) and he loved the combination of white and apricot. And said it was an ‘attractive flower study’. And he thought the ‘Bokeh’ shot was the best one I’ve sent him.

So I’m happy. In spite of the weather it’s been another good week. And who knows what next week will bring!

8 thoughts on “Big Brother and Bokeh”