Another great day at altitude!

The thing about being on this trek is that there is such a constant stream of extraordinary things happening that it’s impossible to know where to begin to describe it all.

We spent the morning being tested and sitting on the terrace with this for our view. After lunch we went down into Namche Bazaar for cakes and coffee. It is the most bizarre and wonderful place, living up to its name. A bustling town clinging to the mountainside, it’s narrow streets thronging not just with people but with cows and ponies and yaks. They just amble up and down like the rest of the folk.

In the evening we had a really cheery dinner – this group is getting on like a house on fire. And then we went next door – to the highest nightclub in the world – and danced with Sherpas. These were the members of…

I’ve just finished the bike test! Cycling until you can’t go on! At three and a half thousand metres!

We,re here for three nights. This is the view! 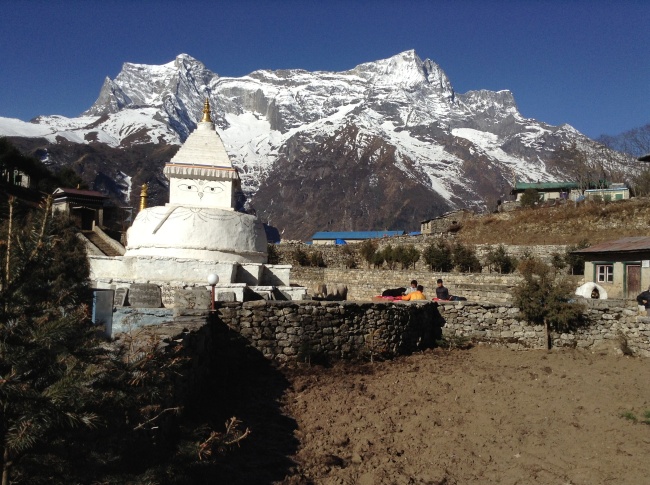 These posts are a bit all over the place, but I’m taking the opportunity whenever the Internet is working to download.

We’re here. Although I don’t quite know where here is. But we got wherever we are after a very very long day which involved getting up at 3.30 this morning, doing our heart rates… and blood pressures….  and stepping on and off boxes for two minutes by torchlight because the electricity in khatmandu was off at 4 am, and then getting on a bus and queuing outside the airport as dawn began to break , rushing through security, and getting onto the thing that I was most worried about! The plane to Lukla. Which turned out to be A M A Z I N G!

We were in Lukla by 6.30 this morning. Tilting and tipping our way in to the tiny landing strip that nestles in the folds of the foothills of the Himalayas.  Got there so fast that we had a couple of hours sitting in the sun…

Three pairs of twins get together in Namche Bazaar!

We overlapped for a night with the trek in front of us . So three sets of twins got together at 3460 metres.

Mary and I were in Metro today! How exciting is that…… 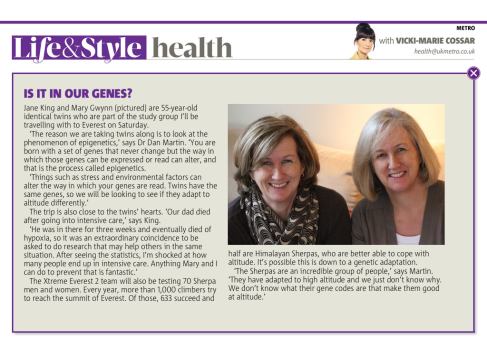 My sister Mary and I are going to Everest Base Camp as part of the Xtreme Everest research project because we are identical twins. People seem to find identical twins quite unusual. But in our family they’re two a penny….

First there’s Mary and me. 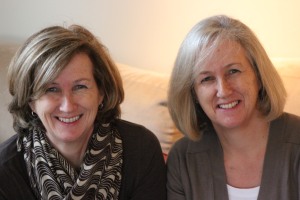 Then there are my daughters Emma and Hattie.

And let’s not forget our cousins Tim and Alastair. 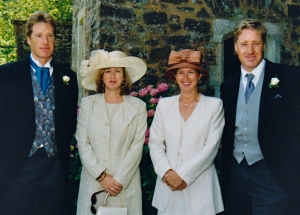 This photo was taken at a family wedding. It’s the only photo we’ve got of the four of us as grown ups.

As a family we seem to disprove many of the myths and theories about identical twins.

There’s the one about non-identical twins being hereditary and identicals being a fluke of nature. Ummmm. Three sets of identical twins in two generations – that’s a pretty big fluke.

Then there’s the one about twins skipping a generation….. I grew up believing this. It never crossed my mind for a single second that I might have twins. It was the biggest shock of my life. A nice shock but even so…..

And what about twins passing down the female line? Our mother and her brother both had identical twins. Another coincidence? It’s hard to believe…..

So we’re an odd bunch. But happy to be so. 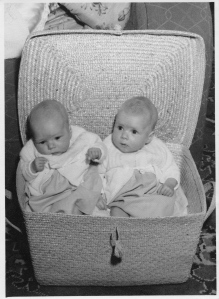 In the basket are Mary and me as babies. I’ve got no idea who is who! It’s quite odd looking at a photo of yourself but not knowing which one is you…

With Emma and Hattie it’s easier. Hattie is on the right and Emma on the left. (How do I know this? Because I wrote on the back of the photo when it was taken.)

They were the most cheerful babies. 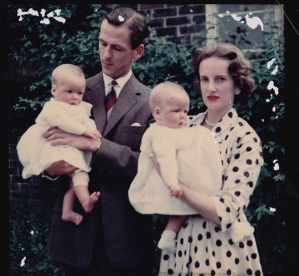 This is Mary and me at our christening with Mary held by our father and me by our mother. This is one of the few photos we’ve got where someone has written on the back. But we’d know which was which anyway because Mary has a bandage on her leg. The joys of being a twin – you get identified by what you wear. Even if it’s only a bandage.

Our mother always insisted she never dressed us in the same clothes when we were young. But there are very few photos of us up to about the age of ten when we’re not dressed in identical outfits.

How young our parents look. Dad was 27, Mum 26. They look a little nervous, don’t you think? And who can blame them….

Here are Emma and Hattie at their christening. (Emma held by Graham, Hattie by me.) It’s 1989. Graham was 32; I was 31. We already had James. He had turned up 15 days late on December 7th, 1986. December 7th, 1986 was my 29th birthday. The birthday I already shared with Mary. We like to group birthdays in this family. It makes remembering the date so much easier!

This is the only picture we’ve got of Mary and me and Tim and Alastair when we were young. The one in the middle is younger sister Lucy. She’s got a few stories to tell about growing up with twins!

And then there are the obligatory bathing suit shots. First Mary and me ….  Another photo where we’ve got no idea who is who! 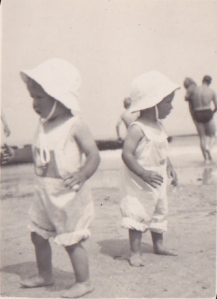 It’s easier with Emma and Hattie…. Hattie’s in the hat!

So there you have us. Three sets of twins in two generations.

One of the questions we get asked all the time is ‘what’s it like being a twin?’ It’s a tricky one to answer. Because we don’t know what it’s like not being a twin.

Garden in waiting 😃. Ready as we’ll ever be for this weekend’s opening for the NGS. We’ve managed to survive the torrential rain 😬 - now just praying for a dry couple of days 🤞. #ngsopengardens #ngssurrey #mygarden #gardens #flowers #fingerscrossedforgoodweather
Peonies and lupine from my cutting garden arranged by me as learnt on my day @coventgardenacademyofflowers 😄#flowers #bouquet #peonies #lupins #flowerarrangements #mygarden #neverthoughticoulddoit
Tulips still bringing colour to the garden 😃 #tulips #mygarden #flowers #springflowers
Ok... nothing from me for months and now you can’t stop me 😬. But I’ve been given three separate bunches of flowers so used the technique I learnt at the Covent Garden Academy to combine them 😊. So satisfying 😃 @coventgardenacademyofflowers #flowerarrangements #cutflowers #bouquet #flowersofinstagram