You know that proverb ‘you can’t have your cake and eat it’? Well here’s a question…. who says?

And another question…. why not?

I mean for crying out loud, you can’t get away from cakes at the moment, whether it’s baking them, eating them, having them, trying to stay away from them. And I bet you a tray of chocolate butterfly cakes with butter cream icing that with all the cake making going on at the moment there are plenty of people out there who are having and eating at the same time. No matter who says you can’t….

And you know something….. I reckon I’m one of them.

I came to this decision a couple of nights ago as I sat in a short sleeved shirt at 7.30 in the evening, guzzling a vast gin and tonic, with chilled out music wafting through the airwaves around me, looking out across the millpond water of Pollenca Bay.

So Graham and I turn to each and grin and say ‘how lucky are we?’ And that’s when we have the ‘cake and eat it’ discussion. Cos someone has said to him that his trouble is that he wants to ‘have his cake and eat it.’ And after giving this a great deal of thought he has decided that his reaction is…. yeah, too damn right, you bet I do!

And this week we reckon we got it just about right.

Except for it was still summer out there. The weather forgot to change and we had blue skies and temperatures in the eighties. So you see what I mean – cake, have, eat. Simples.

So Pollenca this week was chocolate and coffee and carrot – all my favourite cakes rolled into one. Some had pink icing…. 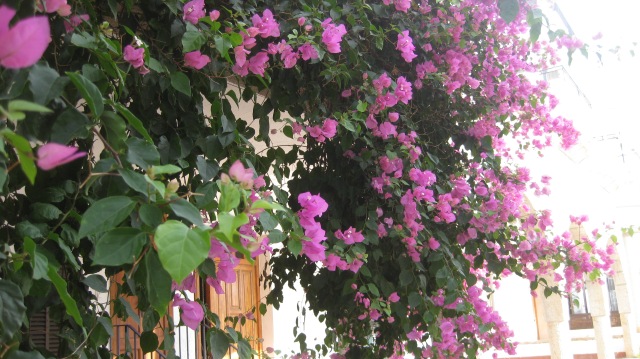 Some even had blue….

There were multi coloured cakes….

And cakes with no icing at all….

And I’m going to leave you with this image. Spotted yesterday as we walked along Pine Walk beside the water’s edge. You can’t see them all but there were actually three dogs in the boat with this rather gorgeous girl.

Who knows where the four of them were going….

But I thought you would like to share them with me. Because they’re fab. And when things are as fab as this, having and eating at the same time are…. well it’s obvious isn’t it…. they’re a piece of cake.

Garden in waiting 😃. Ready as we’ll ever be for this weekend’s opening for the NGS. We’ve managed to survive the torrential rain 😬 - now just praying for a dry couple of days 🤞. #ngsopengardens #ngssurrey #mygarden #gardens #flowers #fingerscrossedforgoodweather
Peonies and lupine from my cutting garden arranged by me as learnt on my day @coventgardenacademyofflowers 😄#flowers #bouquet #peonies #lupins #flowerarrangements #mygarden #neverthoughticoulddoit
Tulips still bringing colour to the garden 😃 #tulips #mygarden #flowers #springflowers
Ok... nothing from me for months and now you can’t stop me 😬. But I’ve been given three separate bunches of flowers so used the technique I learnt at the Covent Garden Academy to combine them 😊. So satisfying 😃 @coventgardenacademyofflowers #flowerarrangements #cutflowers #bouquet #flowersofinstagram