On Monday at Hampton Court we threw the windows open and bathed in the warm air that flowed into the studio.  (To be fair we didn’t actually throw the windows open. They are so ancient that if we were to throw them open there would be a very real danger that they would drop off and plunge to the ground, killing a few visitors on their way. So we had to ask Humaira to open them for us, which she did rather gingerly! But you get the general drift…..)

It’s hard to feel down when the sun is transforming the world, bare branches are bursting into colour in waves of glorious green, and the magnolia blossom I pass on the way to college is worth stopping the car for.

In my garden, (which is always a little late thanks to heavy clay soil and a north facing aspect,) it’s been my tubs which have been the show stoppers. 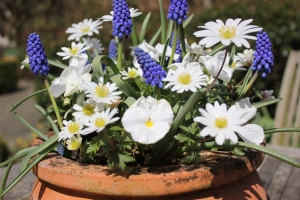 Certainly the bees seem to think so…..

One thought on “What a week…”