I’m not spending a lot of time in my garden at the moment. It’s cold outside, it’s grey outside – and I’ve got the planting plans for the Project 2 Balham garden, ten planting combinations for our Project 1, and a trip to Everest to prepare for…… And only three weeks to fit them all in before I leave for Khatmandu on March 23rd.  Aaaaaaaaaargh.

But yesterday morning I took time out to put into action the cunning construction plan I’ve had in mind ever since I visited Pashley Manor last year.

I have a bed by the garden gate which is the first thing you see when you come into my garden.  Last year I decided to reinvent it and planted it up with lots of lovely colourful herbaceous goodies. But my beautiful bed was not to be. There was non stop rain, a decorator with his scaffolding – boy, did we chose the worst ever year to get the outside of the house painted.

And last but by no means least there was a small cocker spaniel with very big feet.

This year I’ve got my fingers crossed for the rain to give up and go somewhere else. The house is painted and the scaffolding gone. But the one thing we are left with is the small cocker spaniel. Hence the cunning plan.

If you’ve never been to Pashley Manor I suggest you go. It’s the most beautiful house nestling in rolling hills on the Kent/East Sussex border. The gardens are stunning at any time of year but it’s when the tulips are out that it is particularly spectacular.

So last April I went to see the tulips. And was stunned and amazed.

(And I love the fact that the ducks there are so sophisticated they have their own swimming pool!) 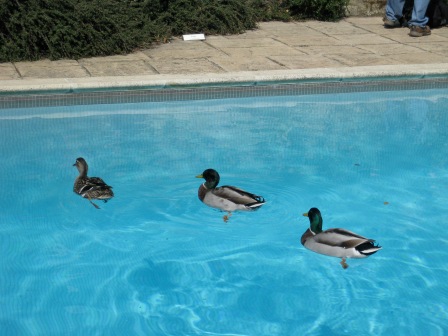 Quick to construct thanks to Stewart (who is the person who does all the hard work in my garden!)

And rather funky, don’t you think.

Watch this space for summer pictures…….